The second edition of EmTech MENA kicked off recently at Jumeirah Emirates Towers. Organised by Dubai Future Foundation, the conference showcases emerging technologies with the greatest potential to impact lives, inspire the future and drive the new global economy.

The event runs until today under the patronage of His Highness Sheikh Hamdan bin Mohammed bin Rashid Al Maktoum, Crown Prince of Dubai, Chairman of the Executive Council of Dubai and Chairman of the Board of Trustees at the Dubai Future Foundation. EmTech MENA has convened over 30 high-profile government officials, experts, academics, entrepreneurs and futurists from around the world. 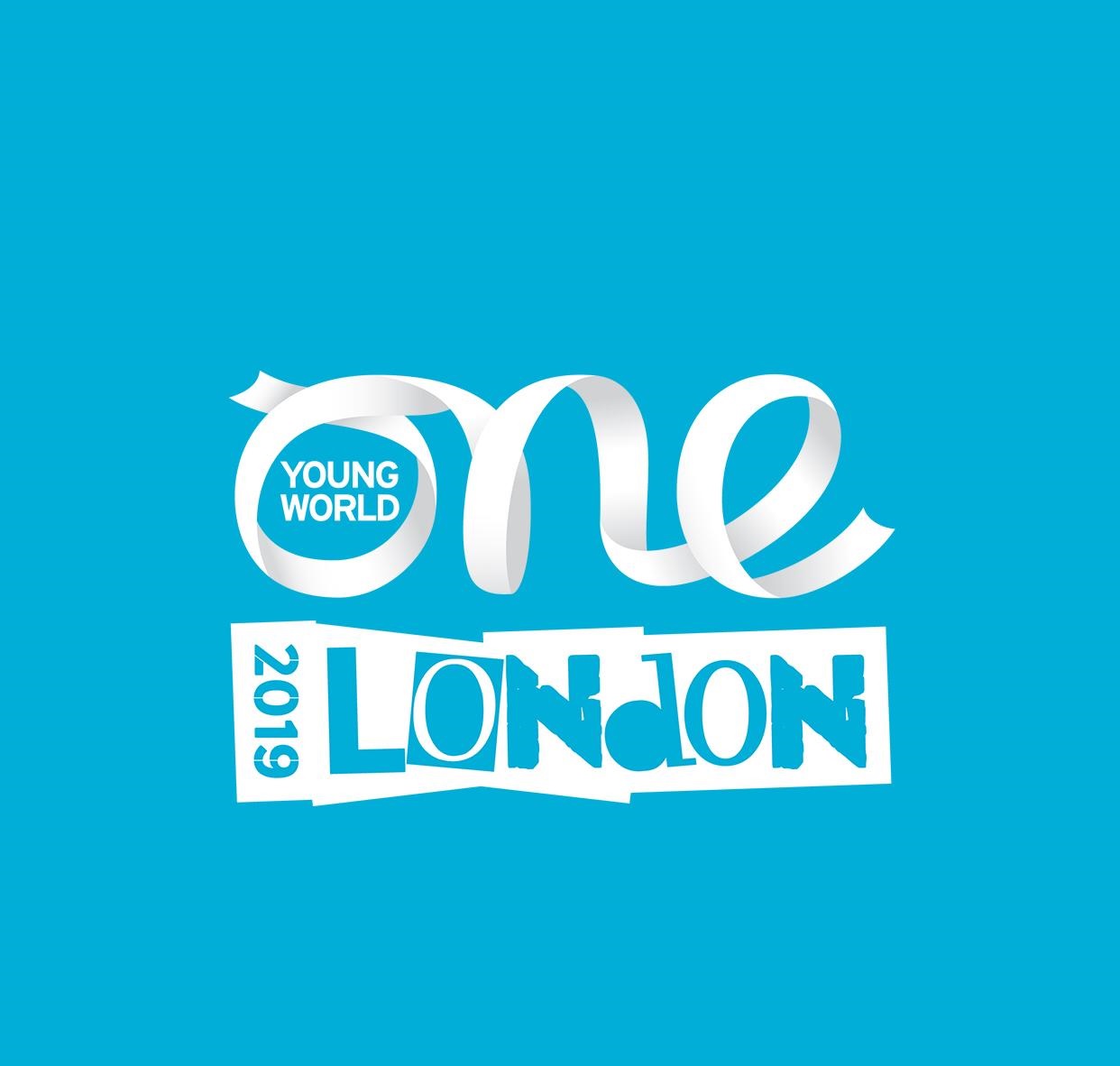 UAE to participate in ‘One Young World Summit 2019’ in London

A UAE delegation will participate in the ‘One Young World Summit 2019’, in London, UK, which will convene the brightest young talent from more than 190 countries, from 22nd to 25th October.

The participation is in line with the UAE’s strategy to empower young people and provide them with an opportunity to contribute to the national development process.

Mansour Ibrahim Al Mansouri, Director-General of the National Media Council, NMC, will lead the delegation to the Summit, where he has also been selected as counsellor alongside other influential political, business and humanitarian leaders such as Justin Trudeau, Canadian Prime Minister; Bill Clinton, former US President; and Mary Robinson, former President of Ireland.

The selection of an Emirati as a counsellor reflects the ever-improving reputation of the UAE within the international community and values Al Mansouri’s expertise on guiding young participants. 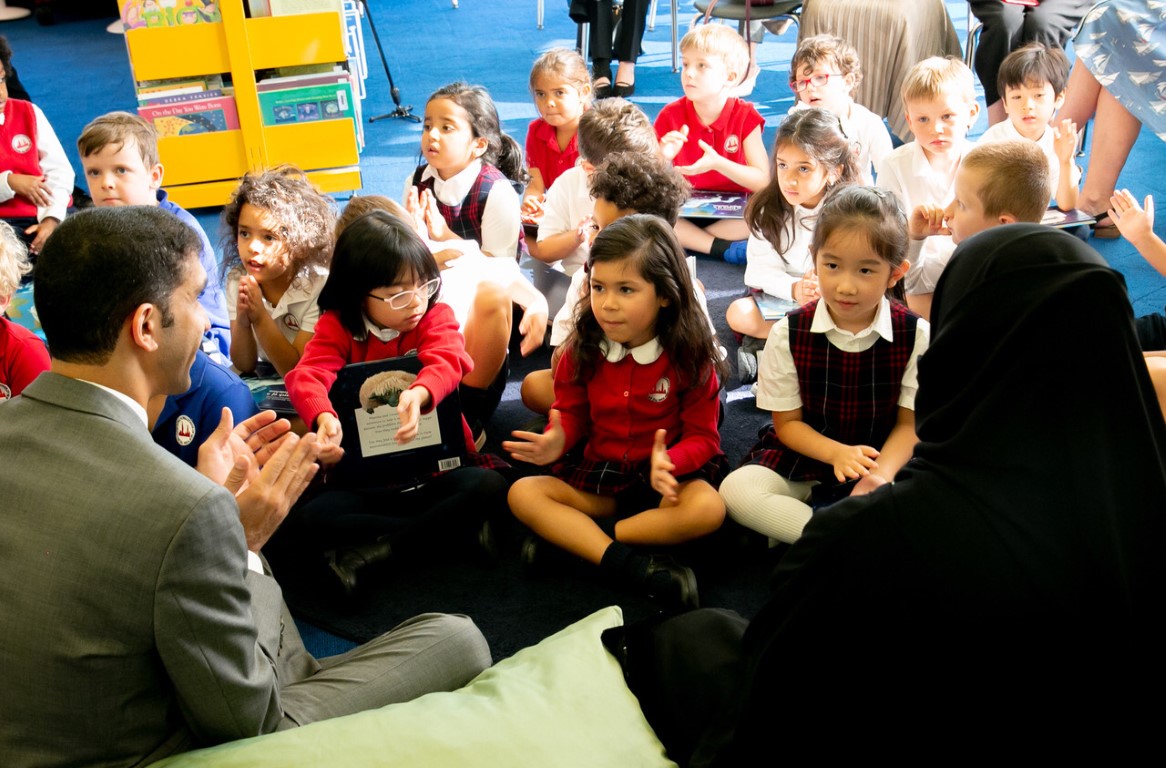 During the trip, Sheikha Shamma also visited British International School and interacted with the young students in a book reading session, where she read her climate change inspired fictional book, ‘The Adventures of Maxima and Coustaud: In Search of a Global Solution’.

As part of her sustainability and climate change agenda, Sheikha Shamma also attended a private meeting with Kristin Hughes, Director of the Global Plastics Action Partnership at the World Economic Forum. They discussed the operational logistics behind building plastic-recycling facilities in the UAE, and alternative methods that can be implemented to negate the use of single use plastics. 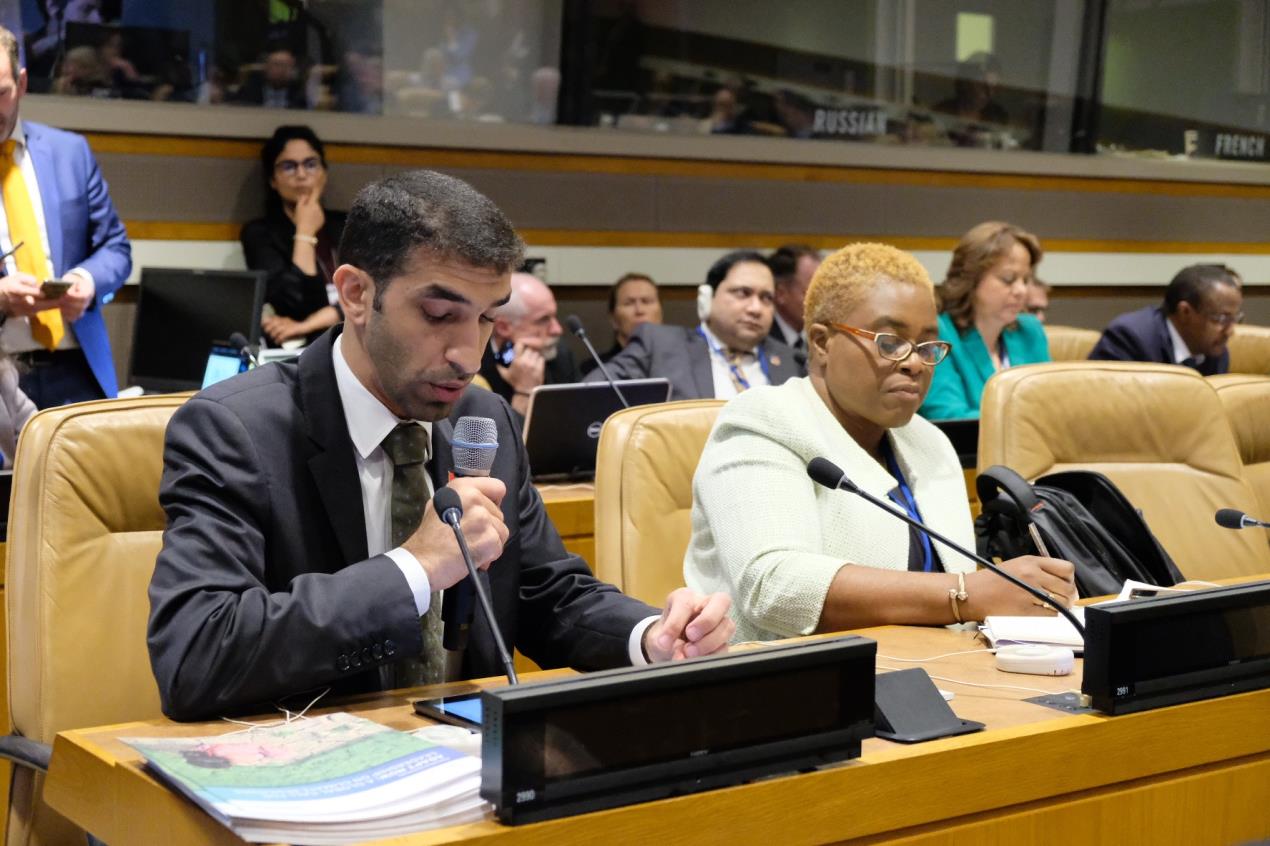 UAE to pass Federal Law on climate to mainstream adaptation, resilience across sectors

On the sidelines of the UN Climate Action Summit in New York, Dr. Thani bin Ahmed Al Zeyoudi, Minister of Climate Change and Environment, announced that the UAE will pass a Federal Law on climate that sets out an inclusive framework for climate action. The law will require authorities to assess and mitigate climate risks prior to proceeding with projects, thus effectively mainstreaming climate adaptation and resilience across sectors.

The minister made the announcement at a session of the Global Commission on Adaptation, GCA, hosted by Prime Minister Mark Rutte of the Netherlands, together with the Commission’s co-chairs, Ban Ki-moon, former UN Secretary-General, Kristalina Georgieva, and Bill Gates.

In his speech, Dr. Al Zeyoudi announced the UAE’s decision to join GCA that aspires to advance climate adaptation solutions.

He said, “We are delighted to join GCA and bring our perspective as a climate-vulnerable Middle Eastern country and a global donor. In this context, we have begun to mainstream resilience into UAE foreign aid. Our US$50 million UAE-Caribbean Renewable Energy Fund has seen power plants built to Category 5 hurricane standards and relocated out of vulnerable zones. The Fund also ‘builds back better’. A prime example is the newly announced green, resilient power system for Barbuda in the wake of Hurricane Irma that is planned under an innovative partnership between Antigua and Barbuda, the UAE, New Zealand, and the CARICOM Development Fund.”

The UAE Embassy in Italy hosted Sheikha Shamma bint Sultan bin Khalifa Al Nahyan, CEO of Alliances for Global Sustainability, Founder of the NGO Circle of Hope, and Founder of the Women’s Empowerment and Equality Board, as a guest of honour to participate in an Emirati Women’s Day celebration, in recognition of her ongoing endeavours in sustainability, philanthropy and women’s empowerment.

In collaboration with the UAE Embassy in Italy, Sheikha Shamma met with global experts from a diverse range of sustainability fields to discuss solutions and collaborative opportunities behind global matters such as gender equality, humanitarianism, environmental sustainability, and social entrepreneurship.

During her visit, Sheikha Shamma was greeted by His Holiness Pope Francis.

Sheikha Shamma’s visit also included a one-to-one meeting with Virginia Raggi, the first female Mayor of Rome. As known advocates for women’s rights and environmental practices, the two discussed the Mayor’s decision to ban single-use plastics in the city and how she is implementing policies that will lead to equal opportunities for women.

As a philanthropic entrepreneur whose efforts often focus on children, Sheikha Shamma also spent time meeting young patients at the Bambino Gesù Paediatric Hospital, where she was privy to the medical advances that the hospital offers in its Nephrology, Rheumatology and Cystic Fibrosis departments.

“It is our collective duty to lead responsibly to create a better world for future generations.”

These inspirational words now sit on the smart white quotation wall of the Møller Institute at Churchill College, Cambridge. They are the words of Sheikha Shamma bint Sultan bin Khalifa Al Nahyan, and sit opposite the words of Winston Churchill and next to a quote from Michelle Obama.

They are the latest edition to the Møller Institute , and were unveiled to a private gathering on Thursday July 18th. At only 28, Sheikha Shamma is the youngest person to have to quote on the wall, but her already vast achievements as a business- woman and philanthropist mean that it is hardly surprising the Sheikha has been honoured in this way.

Sheikha Shamma is the founder of Beacon of Hope, a foundation that supports children, and women in multiple ways. It describes as its purpose the encouragement and fostering of the creation of a more giving and equal world. “With a focus on the unity of youth, we promote education, tolerance, empathy, and encourage a life-long habit of volunteerism and giving.”

Its programme, Wanna Read? encourages the recovery from illness through the joys and relaxation of reading. The non-for profit programme has already placed over 7,000 children’s books in hospitals, and facilitates over 341 volunteers.

Sheikha Shamma has just finished a master’s degree at Cambridge University in Sustainable Leadership. When speaking at the unveiling she talked of the importance of women’s education, she said, “I am lucky to be a girl who received an education.”

She credits the inspiration and her work to her great-grandfather, Sheikh Zayed bin Sultan Al Nahyan. She described the founding father of the Emirates as a visionary man, “who built a nation that has leapfrogged many countries.

She looks back to Sheikh Zayed as an example of superb leadership and vision. The kind of vision that could transform the world. “In only 40 years this man, who was born a Bedouin, transformed this country.” Sheikha Shamma shared her desire to follow in his footsteps. “My dearest wish is to continue his work.”

And what does this look like? According to Sheikha Shamma it is about inspiring and leading others to work and live responsibly. And her goal is to focus on looking after our world and those living in it. She said, “it is time for all of us to think about how the choices we make have an impact on our planet.”

In her speech at the unveiling, Gillian Secrett, CEO of the Møller Institute , described Sheikha Shamma, saying that when she first met her she was, “…struck by her presence, her warmth and her humility.” All attributes which Secrett believes to be imperative for excellent leadership.

The Møller Institute decided to honour Sheikha Shamma to, “recognise her leadership and work and dedication to continue the leadership of her great grandfather.”

In an interview, Sheikh Khalifa Bin Sultan bin Khalifa Al Nahyan told 7Dnews that he and his family were honoured to be able to celebrate his sister’s achievement with the Møller Institute. He went on to say, “it really shows you how far the Emirates have gone with our Great Grandfather’s goal of empowering women. And to see my sister being recognised, we really hope that future generations of Emiratis and women will look up to her.”

The Congress will be held under the theme ‘Circling in on Zero: Circular Economy in the Built Environment’ on 1-2 May 2019 at the Pullman Dubai Creek City Centre hotel. It will focus on how a shift to a circular economy is integral to a net zero carbon future. 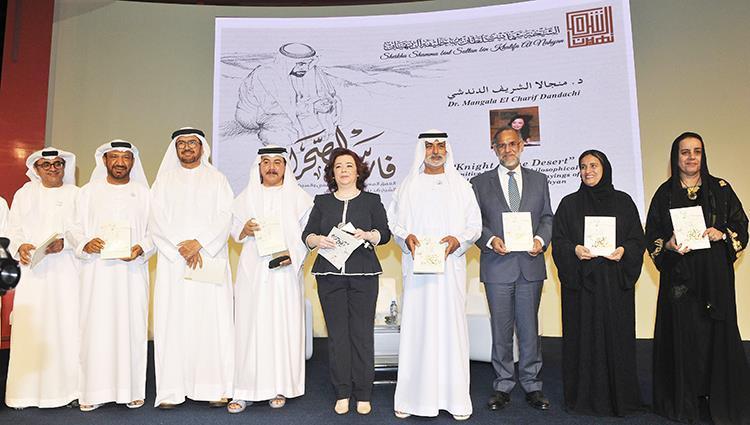 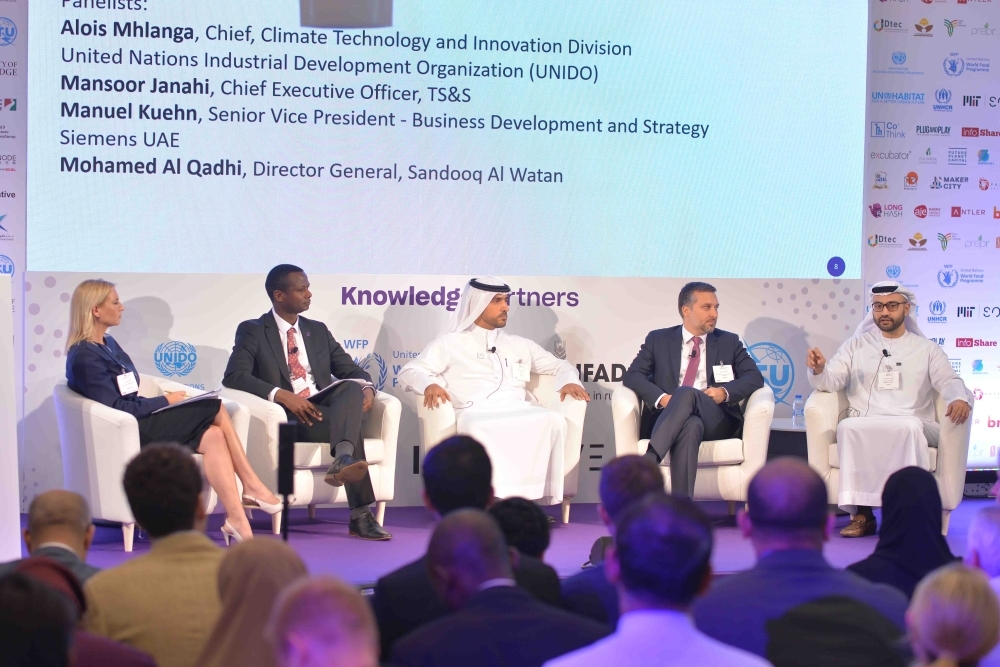 The Mohammed bin Rashid Initiative for Global Prosperity (the Global Prosperity Initiative), an initiative of the Global Manufacturing and Industrialisation Summit (GMIS), calls on global start-ups to develop transformational solutions, aimed at achieving a sustainable future for communities, as showcased by the 16 finalists of its US$1 million Global Maker Challenge at the Pitch Event held in Abu Dhabi and Dubai on the 16th and 17th of April respectively.

The Mohammed bin Rashid Initiative for Global Prosperity is creating an ecosystem to channel innovation towards global good, reinforcing the UAE’s commitment to the United Nations Sustainable Development Goals (SDGs). The UAE is creating the right ecosystem to empower innovative start-ups and entrepreneurs. This is demonstrated by several of the country’s initiatives such as the UAE Strategy for the Fourth Industrial Revolution, as well as the latest legislative direction by the UAE Cabinet on providing long-term visas for entrepreneurs, investors, specialised talent and outstanding students.

Giving the keynote address, Sheikha Shamma bint Sultan bin Khalifa Al Nahyan, Chief Executive Officer, Alliances for Global Sustainability, said: “To bring prosperity means to give access to healthcare and education, to end poverty and injustice and to ensure safety and security to those in need. Technology is playing an important role in improving the lives of many people across the globe. I have been lucky to meet many entrepreneurs who are creating a positive impact. Innovative entrepreneurs like the shortlisted start-ups of the Global Maker Challenge offer hope for global prosperity. I urge you to keep going and embed social and environmental values in your organisations.” 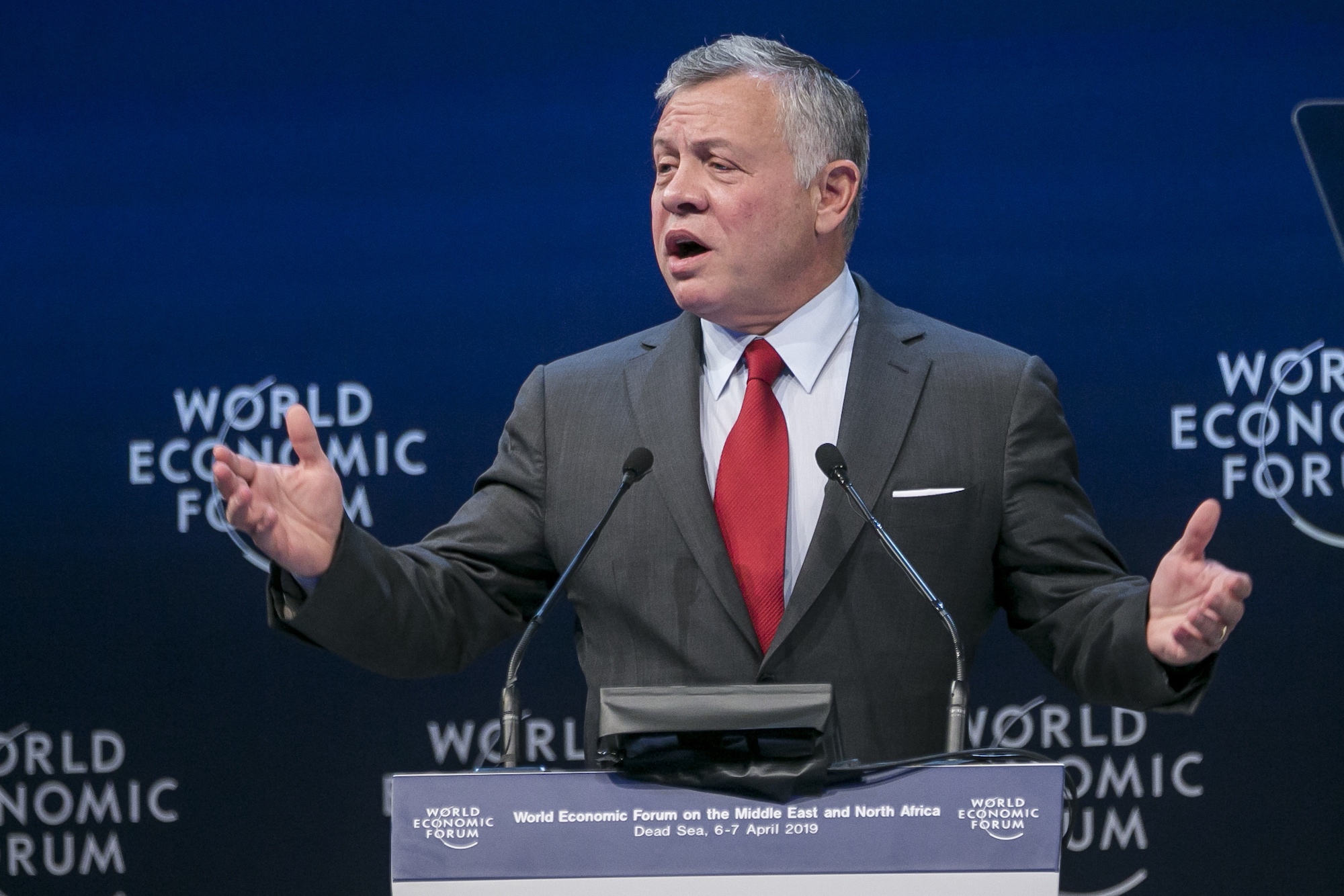 DEAD SEA, Jordan, 7th April, 2019 (WAM) — Sheikha Shamma bint Sultan bin Khalifa Al Nahyan, Founder and CEO of Alliances for Global Sustainability, and a well-known sustainability and environmental awareness advocate, who took the stage at the World Economic Forum 2019 to discuss how regional leaders can engage with the next generation to create a dialogue on social and economic systems for the future.

During her appearance, Sheikha Shamma noted, “Engaging a nation’s youth is something that every society needs to embrace, as disengaged youth have both short and long-term ramifications on society, as a whole.

“Through our youth we generate fresh ideas, develop new concepts and create groundbreaking innovations that tackle issues, such as climate change and its impact on the environment; areas that Alliances for Global Sustainability is dedicated to finding solutions for,” she added.

Sheikha Shamma continues to lend her expertise as the CEO and Founder of Alliances for Global Sustainability, an organisation that links government agencies and private sector businesses to develop and advise on projects in the sphere of sustainability.

The World Economic Forum 2019 began this weekend at the Dead Sea, in which over 1,000 delegates from around the world discussed issues, including the Fourth Industrial Revolution, inclusive new social and economic models, government transparency, global sustainability goals and environmental stewardship.

The keynote address was delivered by His Majesty King Abdullah II of the Hashemite Kingdom of Jordan.